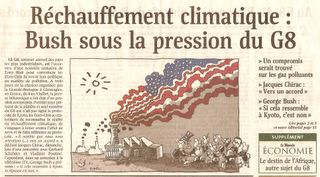 writes John Rosenthal, who goes on to detail how the Kyoto Protocol not only was loaded in favor of the Europeans from the beginning, but how, even so, the latter are in no way being successful in following it directives; a fact little known and (strangely enough) little-made-a-big-deal-about (as we have recently pointed out) among the European populace. But then again, a rather normal fact, as you must understand that they are occupied, like Plantu, with far more important matters, such as castigating Uncle Sam for the world's troubles, environmental and other.
Posted by Erik at 21:18 22 comments:
Email ThisBlogThis!Share to TwitterShare to FacebookShare to Pinterest

During a routine patrol in Baghdad June 2, Army Pfc. Stephen Tschiderer, a medic, was shot in the chest by an enemy sniper, hiding in a van just 75 yards away. The incident was filmed by the insurgents.

Tschiderer, with E Troop, 101st “Saber” Cavalry Division, attached to 3rd Battalion, 156th Infantry Regiment, 256th Brigade Combat Team, 3rd Infantry Division, was knocked to the ground from the impact, but he popped right back up, took cover and located the enemy’s position.

After tracking down the now-wounded sniper with a team from B Company, 4th Battalion, 1st Iraqi Army Brigade, Tschiderer secured the terrorist with a pair of handcuffs and gave medical aid to the terrorist who’d tried to kill him just minutes before.
Posted by Erik at 00:23 No comments:
Email ThisBlogThis!Share to TwitterShare to FacebookShare to Pinterest

Remember the USS Cole? It is the American destroyer that was hit by an al Qaeda bomb in Yemen in October 2000, killing 17. Damaged but not destroyed, the Cole returned to service in December 2003. Columnist Michael Smerconish writes in the Philadelphia Daily News about the Cole's most recent mission:

Before arriving in Philadelphia, the Cole participated in the annual Baltic Sea operations, a joint exercise of 11 nations. But the Cole took an unexpected detour on the way here, for reasons that offer a symbolic story about the U.S. military, one which hasn't been told until now. Here is the way [Cmdr. Brian] Solo spelled out the itinerary in an e-mail to me:

"At 2300 hours on 27 June, COLE received word via the Coast Guard regarding a medical emergency aboard a civilian sailboat in the middle of the Atlantic Ocean... more than 300 [nautical miles] to the southeast of COLE's position. The patient was initially reported to have appendicitis. Due in Philadelphia, COLE nevertheless turned and headed, at best speed (30+ knots) towards the position of the sailboat. Simultaneously, the merchant vessel CHIQUITA NEDERLAND, who was in the vicinity of the sailing vessel, took the patient, a 16-year-old French national, on board, and then headed at best speed to the northwest to meet COLE."

Yes, one of the Navy's finest--in the midst of the war on terror--changed course to save a French teenager. (This isn't a picture of the military the mainstream media is anxious to portray. It's far too sympathetic.)