Posted by Erik at 11:41 No comments:
Email ThisBlogThis!Share to TwitterShare to FacebookShare to Pinterest

A pro-Republican author in France was expelled from a television show during the Donald Trump inauguration after "shock" at her "rather hallucinatory rant."

Mind you, Evelyne Joslain did not say on BFMTV that Barack Obama was a Muslim, but that he might be Muslim, in his heart, specifically, that "I believe Obama is more Muslim in his heart than Christian." This led to shock throughout the French media, with Marianne calling it "surreal" and Télérama declaring that "we couldn't believe our ears." Indeed, the (very) few people who leaped to her defense were said, all of them, to belong to… (wait for it) le Fascosphère. 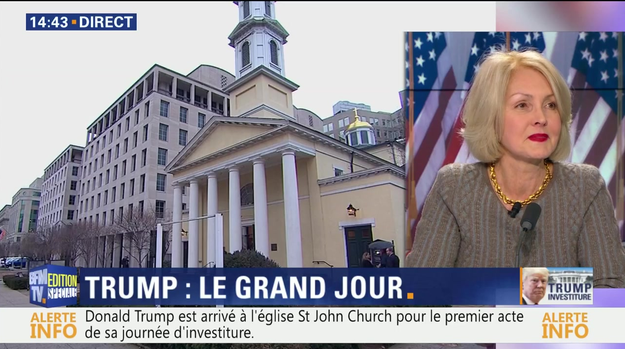 The question (regarding Evelyne Joslain's alleged "misplaced words") that the members of the mainstream media (uncharitably called by some, "presstitutes") of any country, including America itself, never ask and never answer, is the following: what is wrong with being Muslim anyway — given that we are constantly reminded how wonderful, or at least how normal, the religion of peace is — while how insulting is it not to think the leader of a Western nation is Christian — given the fact that we are constantly reminded how obtuse, retrograde, and superstitious those oafish believers are.

And why shouldn't a person be allowed to believe that a certain leader, or a certain type of a country's population is hateful towards the country (or the majority population thereof) that he leads or that they live in? We hear about hate and hate thought and hate crimes all the time? Are only members of the right supposed to belong to such a group? Well, that's exactly the point, ain't it?

The same outrage came up in America itself as the presidential campaign was slowly getting underway when Donald Trump, asked if Obama is a Muslim, "did nothing at the time to disabuse the man of this notion and the candidate has since taken considerable heat for his nonresponse from just about every quarter, including that paragon of justice and honesty Hillary Clinton" (Roger Simon).

Time to head over to PJ Media's Instapundit where Glenn Reynolds and Ed Driscoll have some choice comments, while Jim Treacher, Andrew Klavan, and Brian Gates take the media's double standards a step further in the obligatory snarky section.

There's nothing wrong with being a Muslim. That's why it's considered such a terrible insult. https://t.co/kjqmeMbXgY
— Jim Treacher (@jtLOL) September 18, 2015

Leftists: "How dare Republicans suggest Obama is a Muslim!"
Next breath: "Republicans are so Islamophobic!"

@jtLOL @instapundit likewise, Christians are the most backward, misogynist, racist ppl in America, and how dare you suggest Obama isn't one.
— Brian Gates (@knownasbgates) September 18, 2015

Roger Simon went on to point out the following:


Is Obama a Muslim?  The answer is no.  But what is he then?  Is Obama a Christian, as Jeb Bush asserted in an attempt to make Trump look bad after Thursday's dustup? Not a chance.  Obama is about as pure a post-modern agnostic as you can find.  He's about as Christian as your average gender studies professor at Swarthmore. Religion is for the [44th] president a convenience, an instrument of power.

What Evelyne Joslain didn't, and doesn't, understand is that nobody, but nobody, is allowed to criticize Barack Obama, or even put his words into doubt, since he is not a professional politician (or at least not a professional politician in the normal sense) but something closer to a sainted figure, near-messiah, who is trying to transform the nightmarish hellhole that is America into a European paradise, a place where Americans will finally be so lucky to have as high taxes as Europeans do, as much red tape as Europeans enjoy, and as many bureaucrats as Europeans have.

Indeed, the taboo on saying anything negative about Obama seems coupled with the right, indeed almost the duty, to say nothing positive about people like George Bush, Sarah Palin, and Donald Trump…

Related: • Are conservatives free to fight back when vicious charges are leveled at them designed to instill fear and chill dissent?

• ‘Isolated incident’? Violent episodes from the Left are beginning to feel like Groundhog Day; As long as the Left remains self-righteous, it will continue to terrorize the rest of us

• In the Civil War Between Right and Left, Only the Latter Fights Ferociously