While American cities are synchronizing green lights to improve traffic flow and offering apps to help drivers find parking, many European cities are doing the opposite: creating environments openly hostile to cars.

That is how Elisabeth Rosenthal starts her International Herald Tribune article in which — naturally — notions of (alleged) equality and (so-called) fairness predominate ("it’s not really fair to everyone else if you take the car,” says Zurich’s chief traffic planner, Andy Fellmann). 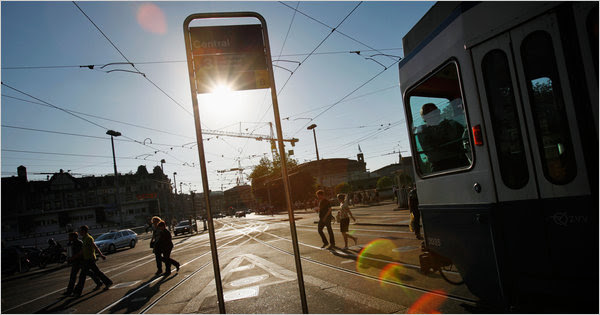 The methods vary, but the mission is clear — to make car use expensive and just plain miserable enough to tilt drivers toward more environmentally friendly modes of transportation.

… “In the United States, there has been much more of a tendency to adapt cities to accommodate driving,” said Peder Jensen, head of the Energy and Transport Group at the European Environment Agency. “Here there has been more movement to make cities more livable for people, to get cities relatively free of cars.”

… To that end, the municipal Traffic Planning Department here in Zurich has been working overtime in recent years to torment drivers. Closely spaced red lights have been added on roads into town, causing delays and angst for commuters. Pedestrian underpasses that once allowed traffic to flow freely across major intersections have been removed. Operators in the city’s ever expanding tram system can turn traffic lights in their favor as they approach, forcing cars to halt. 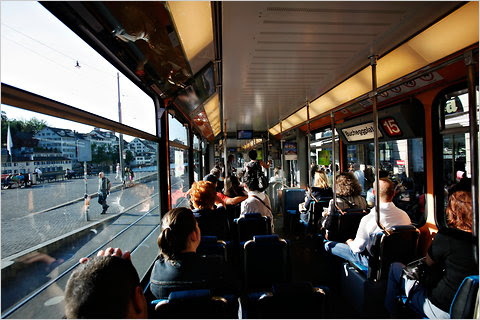 Around Löwenplatz, one of Zurich’s busiest squares, cars are now banned on many blocks. Where permitted, their speed is limited to a snail’s pace so that crosswalks and crossing signs can be removed entirely, giving people on foot the right to cross anywhere they like at any time.

As he stood watching a few cars inch through a mass of bicycles and pedestrians, the city’s chief traffic planner, Andy Fellmann, smiled. “Driving is a stop-and-go experience,” he said. “That’s what we like! Our goal is to reconquer public space for pedestrians, not to make it easy for drivers.”

…there is grumbling. “There are all these zones where you can only drive 20 or 30 kilometers per hour [about 12 to 18 miles an hour], which is rather stressful,” Thomas Rickli, a consultant, said as he parked his Jaguar in a lot at the edge of town. “It’s useless.”

…It often takes extreme measures to get people out of their cars,

and providing good public transportation is a crucial first step. One novel strategy in Europe is intentionally making it harder and more costly to park. “Parking is everywhere in the United States, but it’s disappearing from the urban space in Europe,” said Mr. Kodransky, whose recent report “Europe’s Parking U-Turn” surveys the shift.

…With politicians and most citizens still largely behind them, Zurich’s planners continue their traffic-taming quest, shortening the green-light periods and lengthening the red with the goal that pedestrians wait no more than 20 seconds to cross.

“We would never synchronize green lights for cars with our philosophy,” said Pio Marzolini, a city official. “When I’m in other cities, I feel like I’m always waiting to cross a street. I can’t get used to the idea that I am worth less than a car.” 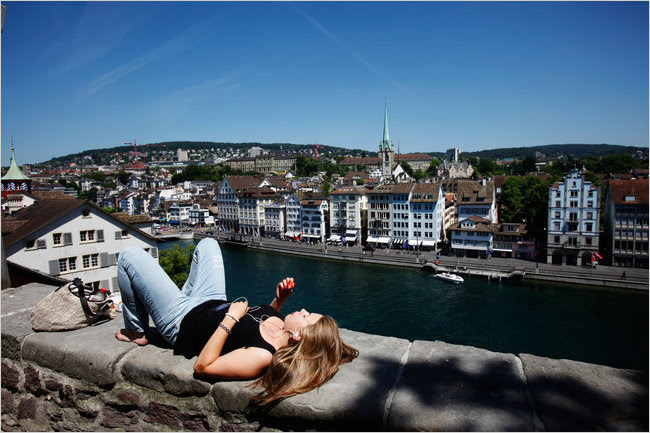 Posted by Erik at 23:22 No comments:
Email ThisBlogThis!Share to TwitterShare to FacebookShare to Pinterest
Newer Posts Older Posts Home
Subscribe to: Posts (Atom)