Posted by Erik at 23:17
Email ThisBlogThis!Share to TwitterShare to FacebookShare to Pinterest

Posted by Erik at 20:23 No comments:
Email ThisBlogThis!Share to TwitterShare to FacebookShare to Pinterest

Posted by Erik at 20:18 No comments:
Email ThisBlogThis!Share to TwitterShare to FacebookShare to Pinterest

Posted by Erik at 20:03 No comments:
Email ThisBlogThis!Share to TwitterShare to FacebookShare to Pinterest

Posted by Erik at 18:47 No comments:
Email ThisBlogThis!Share to TwitterShare to FacebookShare to Pinterest

Any of you who know me knows how appalled I get anytime I read or hear the French media trying to stuff down our throats their self-serving lying charges (those against Aznar, Bush, and Blair, i.e., anybody whom they don't feel any sympathy with).

So when I read that the Mémorial de Caen was organizing a conference with Jean-Marie Colombani, among others ("QUELLE LIBERTÉ POUR L'INFORMATION DANS UN MONDE INQUIÉTANT ?", organized in tandem with Les Amis de l'hebdomadaire La Vie and Reporters sans Frontières), I knew I had to attend. I wanted to give Le Monde's director a piece of my mind (in a diplomatic manner, natch). Three hours before it started at 7 pm on March 23, 2004, I jumped into my trusty jalopy, and drove the 260 km to Caen, arriving just in the nick of time. 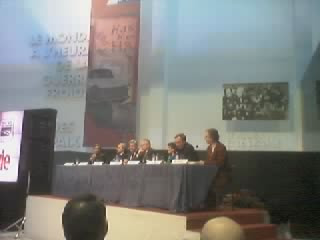 And sure enough, the first thing any of the five intervenants did (with a constant wry smile on his face) was to attack the lies of politicians, ridicule the partisanship of the media, and bemoan the jingoism of the population (meaning those of the US, the UK, and Aznar's Spain exclusively, bien sûr). It was Jean-Marie Charon, "Sociologue des médias" (whatever that means), who opened the débat — the others being (left to right on the admittedly unclear photo) Colombani, Walter Wells, Directeur de l'International Herald Tribune (beard), Jean-Jacques Lerosier, Grand reporter à Ouest-France, and Jacqueline Papet, Rédactrice-en-chef de RFI, with the moderators answering to the names of Daniel Junqua, Journaliste et Vice-président de RSF, and Jean-Claude Escaffit, Journaliste à La Vie et Directeur des Amis de La Vie.

Before I left Paris, I'd reviewed and written down (in telegraph-style) a handful of arguments: these ranged from the Iraqis quoted in Reason, on Iraq the Model, and in Le Monde itself, to Doug's post on Le Monde's partisan mistranslation of Michael Ignatieff's piece in the New York Times.

The only problem was a rather big one, I learned as a I headed for my seat: questions would not be permitted, except in written form on small pieces of paper handed over to one of the animators. So I knew I had to pay close attention if I wanted to find an appropriate moment when to jump in. And I would obviously not have time to develop any of the arguments (especially since Eskaffit seemed to be a control freak).

Eskaffit was growing increasingly more vocal in asking/telling me to keep quiet (shades of Chirac?) — he claimed that "de toutes façons", nobody could hear me — so seeing the end approaching (and having a hard time competing against a microphone), I pulled out my final ace — the final ace being a book, which I held above my head. (Yes, there did seem to be a somewhat theatrical element to this scene; why do you ask?) "Et en matière de mensonges, il y a ce livre d'un rédacteur de La Croix, qui a été licencié pour l'avoir publié, qui s'appelle Comment la presse nous a désinformés sur l'Irak. Et qui raconte les partis pris des Français pour diaboliser Bush, pour sanctifier Chirac, et pour communier avec les partis de la 'paix'."

Even a few audience members had by now started to tell me to keep quiet, but that seemed an appropriate place to end anyway, so with that I sat down.

As for Eskaffit, he went on talking to the intervenants… ignoring completely what I had said. (While a couple of people behind me asked to see the book.) Well, I felt I had done my blogger's duty, so to speak, so I sat back, pretty content with myself.

Then, as Junqua made his last remarks, I understood that some people had heard me; the RSF moderator surprised me by pulling out his own copy of Alain Hertoghe's book (which he had in his briefcase), and explained that it provided a negative view of the French media during the Iraq war. But then he added that there was another book, detailing the French press's doings during the first Gulf war, with a positive slant, and that one could not read the first book without comparing it to the second. He tried to conclude that Hertoghe's book was a partisan "brûlot" that was not very friendly to his colleagues. (This from a colloque which had just declared that, happily, the old tradition in the press of refusing to criticize one's colleagues had now become "caduc"!)

I wasn't going to let him get away with that as the final word, so I let out another comment: "Les médias ont complètement censuré ce livre!" (But Eskaffit immediately started interrupting again.)

Afterwards, I went up to speak to some of the intervenants. Wells asked to see Hertoghe's book, which he wanted to check out. As for Junqua, he admitted it was news to him that the La Croix editor had been fired as a result of the book's publication.

So, all in all, a satisfying 10 minutes. (But hardly worth doing again, not at that distance. At least not without a couple of chums to have a drink with, afterwards.)

P.S. This was my first post for ¡No Pasarán!

Posted by Erik at 18:35 No comments:
Email ThisBlogThis!Share to TwitterShare to FacebookShare to Pinterest

Posted by Erik at 04:52 No comments:
Email ThisBlogThis!Share to TwitterShare to FacebookShare to Pinterest

ay 1 marks the birth of a weblog. As with the other blogs I participate in, its function is to "go beyond 'ideas' and 'opinions' to see what lies hidden underneath".

With reference to France's newspaper of reference, it is to show to what extent its editors, journalists, and readers are off the mark when they consider it to be a bastion of objectivity and an example of journalistic excellence (indeed, to be "the newspaper of reference") — even an example to their colleagues across the Atlantic Ocean. As this attitude is hardly rare in France (and Europe), other French media outlets will sometimes appear on this weblog as guests of honor.

Some postings will be English, some in French, and some in both languages.

The postings posted on this Labor Day may give some readers who are already familiar with my other sites a feeling of déjà vu. That's because, to start with more than a post or two, I have gone to my other sites and transferred some postings to here. Not to worry: after the week-end, you will be getting new material on a regular basis.