Posted by Erik at 14:26 No comments:
Email ThisBlogThis!Share to TwitterShare to FacebookShare to Pinterest

Posted by Erik at 14:18 No comments:
Email ThisBlogThis!Share to TwitterShare to FacebookShare to Pinterest

Jodorowsky's Dune: Documentary on the Great Cinematic Epic That Never Came to Be

Being released in France right now is Frank Pavich's celebrated documentary on the filming of Jodorowsky's Dune, the genesis of one of cinema's greatest epics that never was. 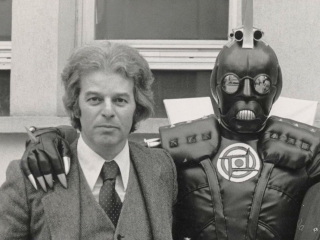 The Chilean writer, whom I had the pleasure of interviewing 15 years ago (besides my many interviews with his frequent co-worker Jean Giraud (Moebius)) drips with passion as he talks of all the artists he will bring together to make a film of Frank Herbert's science fiction bestseller.

Various trailers exist for Jodorowsky's Dune, which did not come to pass, when the producers lost faith in the Paris-based film director, theater director, screenwriter, playwright, actor, author, poet, producer, composer, musician, and, last but not least, comic book writer, not to mention spiritual guru.

(Jodo's attitude probably did little to help, when the man came back with the screenplay for a 14-hour movie and when he was quoted as saying, “I don’t want to make industrial films to earn money, to make a living. I want to make films to lose money, films that oblige me to search employment in other creations.”)


The film notes that Jodorowsky's script, extensive storyboards, and concept art were sent to all major film studios, and argues that these were inspirational to later film productions, including the Alien, Star Wars, and Terminator series. In particular, the Jodorowsky-assembled team of O'Bannon, Foss, Giger and Giraud went on to collaborate on the 1979 film Alien.

"It was a great undertaking to do the script," Jodowrosky says in the film. Speaking of Herbert's novel, he says: "It's very, it's like Proust, I compare it to great literature."